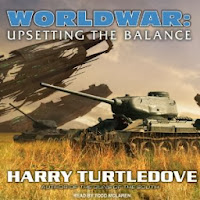 What if Orson Welles’s infamous War of the Worlds radio drama had become a reality, and alien species would have visited our planet with an imperialistic agenda? How could humanity stand up against a technologically much more advanced foe, and what changes did the opposing sides inflict on each other in an all out war? How would known and less known historical characters have acted in such an unprecedented situation? These are the major themes Harry Turtledove comes around in his World War saga.


In this alternate universe a completely unexpected event changes the course of known history. Global conflict escalates into interstellar when our alien conquerors, The Race arrived at the peak of World War Two, and they couldn’t have picked the wrongest day.

I think I don’t spoil the fun of the new readers much if I tell that factions of humanity at each other’s throat behave like hooligans when someone else tries to force a new authority upon them. Uneasy truces and staggering alliances come into being overnight, strange bedfellows try to stall the alien juggernaut all around the world with an eye on each other. Harry Turtledove tells his story through four quite long books, and the master did pretty good job at emplacing known and lesser know historical characters in this fictitious situation.

Maybe the biggest achievement of the author is that he emphasizes greatly what wartime and occupation means for the average Joe, when daily meals, electricity, fuel comes at premium. The sheer cumulative length of the books and Turtledove’s expressive descriptions can make the reader feel almost war-weary at the end.

The author takes his time. If someone is used to and expects a plot with stunning and abundant turn of events like in modern TV-series can be for a disappointment. These books do not want to stun us in every chapter and they require a longer attention-span. Overall, the plot is predictable in the long run, and my biggest problem with real life history interpretations is exactly this that their message is often the couldn’t have happened any other way. If we can set this aside,  HarryTurtledove can still entertain us for a long time, hilarious moments sparks through the flow of events occasionally.

The human and alien characters of World War Series are loveable or despisable, they feel human, and that is the point. The writer has the guts to kill some of them. It’s a war drama after all, if somebody dies it stays dead. No soap opera comebacks.

This is Turtledove excels. He really shows us this alternate history as a global conflict and chooses his characters accordingly. He does the picturing of  different cultures so well that I felt some of them more alien than The Race itself. Various people, depending on the weight of the oppressing boots on their necks do everything to survive, and accordingly to their own historical and cultural heritage they percept the alien invasion.

By the way, the aliens. Turtledove put a lot of effort in creating a different (with capital d) foe for humanity, with a dissimilar mindset and without our everyday urge for sex and domination. Yet, he provided them with enough human traits for us to sympathize with them sometimes.

I think it’s time for an explanation how a Star Wars character appeared in my title. The Race or the Lizards as humans call them strikes me visually as the slipping reptiloid from The Phantom Menace. Before somebody jumps to the conclusion that the invaders are more funny than menacing, I have to tell, they really give us a beating before it gets somehow better.

Another important thing that the World War Series are less of a science fiction when it comes to technology. Despite space travel, the Race war machine is not much different from today’s high-tech armies and military methods.

I do not have regrets about reading through the four books, but sometimes I had to collect some strength for days to pick up the line again. Don’t worry in that case, we won’t forget anything important because Harry Turtledove is repetitive enough to keep us up to date about who is who and how he/she/ got there at the first place.


The four book saga does not end here, but will I go through the sequels (because there are) as well? Sooner or later, the Worldwar Series are reliable but not necessarily a stunning entertainment. The real question, is this good enough for you?


And who (else) can be that maniac human wall who trots out in his SS-uniform in the Kremlin? I just wish a cable channel picked the story up and made in into TV-series. Any road, the World War Series could be a proper present to a history buff for Christmas. It certainly helps to kill odd hours.

"Meet the author". This is the good man himself. Turtledove's alternate history works can fill a small library, so I'm pretty sure that we will meet him again on these pages.