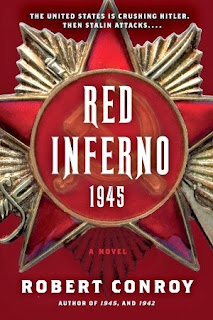 The final showdown between the West and the East is a recurring theme of alternate history novels and videogame scripts. The never materialized Third World War, the arms race and the amassed weapon stockpiles always kept the fantasy of military minded people occupied, and the chess boards with the red and blue figures were set up again and again. The better known examples are Tom Clancy’s classic Red Storm Rising or the Red Alert real-time strategy games. Robert Conroy’s less known but highly enjoyable Red Inferno: 1945 put this clash at the very beginning.

Adolf Hitler still draws a breath when the winners start to quarrel over the spoils, and the relatively unharmed countryside of Germany to the west of the Elbe are ravaged by a old-new war. The victory parade in Berlin never happened. And this is all the SPOILER you will get from me.

I have to give it to Robert Conroy, he described a plausible scenario about what events could have led to an all out war between the USSR and the Western Allies. The phases of the rapid escalation and the reasons behind them in Red Inferno are well articulated and easy to follow. Conroy clearly wanted to write an entertaining history novel and not a deep political thriller.

But what military hardware nerds are really interested at are the flow of battles and technical details of this major test of strength. I was kinda happy with the script of the war itself. The turns of events in the Red Inferno: 1945 are plenty. I didn't get a chance to be bored, the book makes a real good job at keeping your attention, right until to the explosive finish. Just keep up with dealing with all those horrors and the dark side of the human nature because a lot of ugliness awaits.

On the other hand, veterans of Tom Clancy books or military history buffs might miss the deeper details about the technical aspects of this war. I had the feeling that Conroy's knowledge about the then military technology is a bit superficial, or the author chose to focus more on the human faces and experiences of the war consciously. The lack of finer technical details and comparison of the military hardware of the opposing sides can bother some. It's a great war story, but not a techno-thriller by modern means. Actually, it reminded me a bit at Larry Bond's Red Phoenix in that aspect, a bit simplistic, but the „casuals” will have a great reading nevertheless.

Hold that thought, the human characters. Cute and plastic they are, one of the love stories in the book is so clumsy and ackward that I have almost jumped to the conclusion that history novelists just haven't got the mindset for writing credible romances. Well, the other love story kinda works. I guess you just can't have it all. But this should be our greatest problem with the Red Inferno.

It's more painful that the novel is short, you can finish it off in a weekend. This topic deserves two volumes at least. The Red Inferno: 1945 could have been a starting point of a whole „Conroyverse” with a unique timeline instead of an enjoyable quicky. So, you will get what you pay for, but Red Inferno – as happy ride it is - won't make you read itself over and again like the Tom Clancy classics do. A pity, Robert Conroy didn't give us a classic but more of a consume and forget piece. And, it's still worth it.